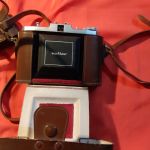 The Nettar series by Zeiss Ikon was a successful range of self-erecting folding cameras for 120 roll film (often described as B2 6x9 film). Several types were offered for 6×9cm, 6×6cm and 6×4.5cm format, with different lenses in a variety of shutters. Zeiss Ikon also produced a Nettar equipped with an exposure meter, the Nettax (513/16).

Zeiss Ikon always advertised the Nettar series as being for the amateur photographer. Nevertheless these cameras share many parts with the much more expensive Ikonta series (e.g. body and struts). The Nettar series may lack the higher specified lens/shutter combinations and things like film type and speed memo discs but the observed built quality is en par with that of the Ikontas.