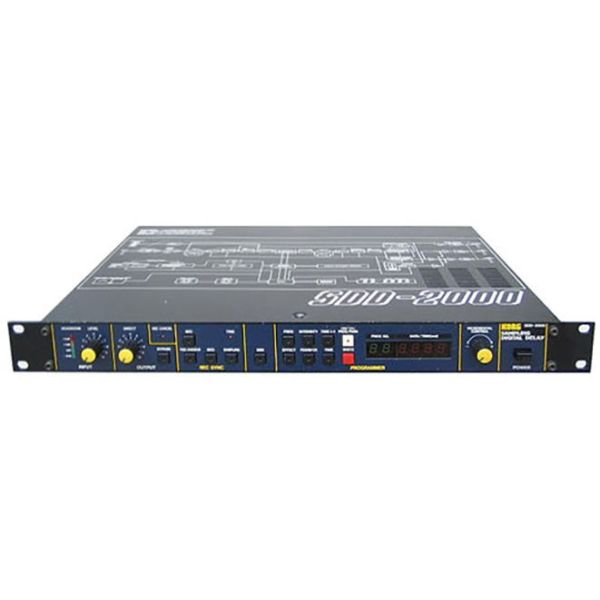 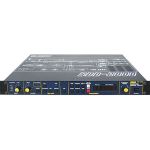 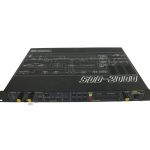 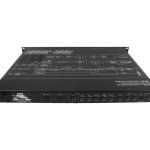 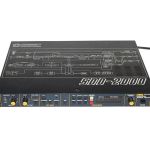 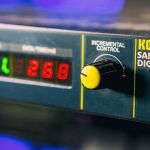 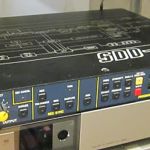 Korg SDD-2000
The SDD-2000 is a programmable digital delay/sample playback with 64 memory slots and MIDI but without the knobs. I use it for slap, echo, and haas FX. The only beef I have is that the bypass button is not a true bypass but replaces the FX with direct signal, so you have to be careful how you patch it in. For haas FX this is OK, but if you use the 2000 on an FX buss of your console you will have direct signal in bypass mode which is not a good idea.  There's no MIX control, just input and direct out control.
Specifications
The delays in the SDD-2000 can go from 0.1 to 1092 milliseconds at 18Khz bandwidth, or a X4 mode expands it out to 4.368 seconds but at reduced 4.5Khz bandwidth, which is adequate for emulating analog tape echo units.  It's a 12bit system but there is no information in the manuals as to the sampling rate.  Delay time can be synced to MIDI Clock.  Nice touch is the digital readout of delay time, which you can dial at resolutions of 1ms (or 0.1ms at 10ms delay or less when in 1X mode).  Unlike the rest of the SDD line, there are no filters available for the feedback path.
MIDI in & Thru are provided, but no MIDI Out (?!?).  It has a rotary encoder and buttons for parameter access, a'la Moog Source.  Much better than increment/decrement buttons and menus.  You get the basic delay parameters of delay time, effect level, feedback, LFO frequency and intensity.  Nothing fancy here.  The feedback (regeneration) can be inverted, the *key* to killer flange effects, and you can get up to 110% feedback for runaway loops.  You don't often see programmable effect level - since I relegated this unit to slap and echo, programmable effect level is really nice to attenuate effect level as delay time gets longer, so I don't have to move the FX return when changing delay programs.
The tap tempo feature is great; you just tap the button twice to the tempo and it figures out the delay time.  You can use MIDI to trigger the tap tempo.  I have successfully used this to tap a delay time with the beat of live music.  My unit had a couple of malfunctioning buttons - replacements were not available so I used generic momentary buttons from Radio Shack.  I purposedly rearranged button to put the new ones where they would be most useful, one of which was TAP which turned out to be a good idea.
When you use it in sample mode with MIDI enabled, it will scale the sample across a three octave range for triggering the sample over MIDI, but it's monophonic with low note priority.  You can either loop the sample or trigger it once.  You can use MIDI pitch bend and modulation messages on the sample, and you can vary the delay and feedback parameters while a sample is playing.  Changing the delay time parameter will truncate the recorded sample.
On the rear panel we have jacks for MIDI in/thru, audio input, direct output, positive and negative mix output, bypass, record cancel, program up, record, and trigger.  There is also a TUNE control to shift the sample pitch +/-50cents.
Changing the delay time interrupts the audio signal which is common for a digital delay, so this is not a box you'd use for live realtime tweaking.

In my experiments the SDD-2000 gets the best flange effect and the best echo effect of the three SDD units I have.  I don't even use it for modulated delay effects like chorus, the others are better for that.  I did play with the sample playback feature and it wasn't much trouble.  Even though it's 12-bit A/D, it sounds *good*.  The lack of MIDI Out is a mystery, since you can load patches and alter parameters over MIDI but you can't save patches over MIDI!