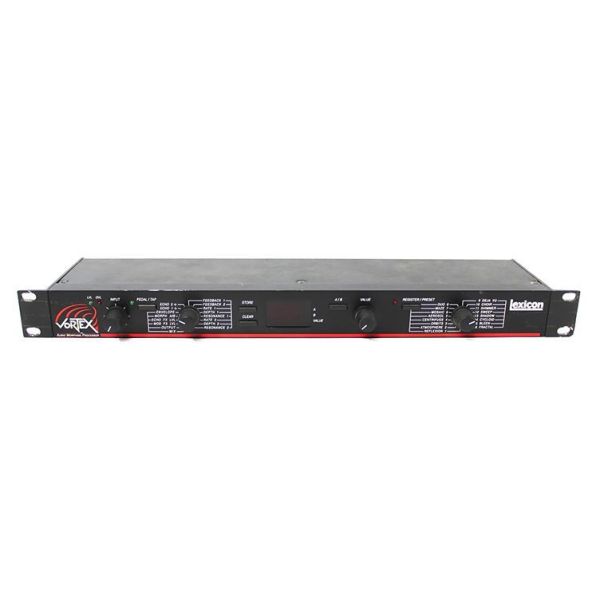 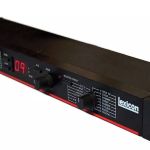 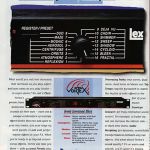 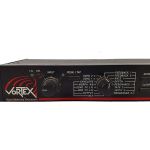 One of a kind true stereo effects unit. More like a musical instrument than a passive effects "black box". I am the original owner and it has been in a smoke free studio in a rack since I bought it new in 1995. It has had very little use, probably about 40 hours maximum and always in the studio, I never gigged with it.
This unit does things no other effects unit does and I have owned quite a few by Lexicon, Eventide, Electro Harmonix plus tons of plug ins. It is truly bizarre and it doesn't surprise me that they discontinued it. This is for people that think outside the box and view effects as instruments in themselves. It comes with presets and you can make and save your own!
The whole point of the unit is that it morphs from preset A to preset B. It's called an Audio Morphing Processor... So if you don't have the right foot switch you are missing out on all the wacky undulating morphing fun! On some of these presets it takes its time... and its in SteReO!
The Vortex is a true-stereo processor, where the left and right inputs are processed independently in most effects. The Audio Morphing (TM) feature allows you to change between two existing patches. Morphing is a complete parametric and algorithmic restructuring of two independent effects, rather than a simple crossfade and you can morph between any two effects you have created.
When you press A/B, Vortex doesn't simply switch back and forth between Banks A and
B. It transforms one effect into another. The rate at which this transformation occurs
is determined by the MORPH A/B parameter. MORPH A/B allows you to determine the time it takes for one effect to transform into
another when A/B is pressed. Morph rates, Audio Morphing like other parameters, are stored as part of the effect.
—————————————
30 years ago, Lexicon was the name in reverb. Their advanced algorithms were the envy of all, and the boxes that produced them were pricey, overdesigned affairs aimed at pro studios. However, by the early 90s they’d begun trundling out a handful of stripped-down, cut-price effects aimed at the burgeoning home and project studio market. Predictably, these cheaper boxes were of the bread and butter variety, offering reverb or familiar pitch- and time-based effects, and clearly designed to get the ‘Lexicon sound’ into the hands of bedroom producers who couldn’t afford gear from the big boys. They suffered from less-than-stellar sample rates and a lack of hands-on control, but they were serviceable and successful.
In 1993, though, the company’s budget line took a hard left turn. After the bland (if popular) 1U reverb called Alex, Lexicon unleashed a pair of processors that were unlike anything else they’d produced. One - the JamMan - was a nifty digital looper designed to replace the tape-based sound-on-sound layering loved by purveyors of ambient loop music - think Robert Fripp. Though it wasn’t the first dedicated digital looper, it was the first to reach a mass market. The other product in Lexicon’s new line, however, was something entirely new. Called the Vortex, it was, at face value, a fairly standard pitch- and time-based processor capable of generating all manner of tempo-synced delay, chorus, flanging, and phaser effects.
To understand why this caused excitement, one must consider that the word ‘morph’ had only recently come into the popular vernacular, thanks to the then-cutting edge computer graphics seen in the recently-released James Cameron film Terminator 2: Judgment Day, and the video for Michael Jackson’s Black Or White.
Could such an effect work in the audio realm? Certainly, there were academics working on ways to morph digitally resynthesised sounds, but such technology was quite experimental and not inexpensive. Lexicon’s approach was to apply the idea instead to effects algorithms and their associated parameters. Not to be confused with merely crossfading between two sounds, this approach to morphing lets the user gradually shift between two complete, independent presets. This takes place over a user-defined period of time. It’s a strange effect, and one that works best when performed slowly and exposed in a mix. The sounds in between the source preset and the destination are often wholly unpredictable and inspiring.
The Vortex was not a massive success at the time, and didn’t remain in Lexicon’s catalogue for long. It was, naturally, only embraced by experimental musicians after it was discontinued. Oddly, there are no direct plugin emulations of the Vortex in the realm of software.